One of the many ways Rodrock Development nurtures a sense of community is through its annual Rodrock Vision Scholarship. This year, some $4,000 was awarded to deserving students. Among the winners was (standing, from left to right) Hunter Harris, Ryan Henn, Liam Shearon, and Grace Lovettwith, alongside Brenda Sanders, President of Rodrock & Associates, Realtors®.​

Among them was Zach Hutchings, who graduated from Olathe West High School and has his sights set on a degree in Construction Management. But first this accomplished triplet will play baseball at MidAmerican Nazarene before transferring to Kansas State to complete his degree.

Ryan Henn will attend the University of Kansas majoring in Behavioral Neuroscience, before continuing to medical school. “From there, I want to study learning disabilities like dyslexia, and try to find a cure,” says Ryan. “So, the Vision Scholarship means that there is one more person, myself, who’s closer to solving a worldwide problem, that will hopefully improve the lives of countless people.”

Liam Shearon has lived within a Rodrock Development almost his entire life and was another proud scholarship recipient.

“I am honored and grateful to have been selected as a Rodrock Vision Scholarship recipient,” Liam says. “One of my goals has been to graduate college debt-free and receiving this scholarship will help me get closer to that goal. I will attend Kansas State University in the fall and plan on studying mechanical engineering and using my degree to work in the automotive industry.”

Hunter Harris also will be attending Kansas State this fall, majoring in mechanical engineering. “Receiving this scholarship was such an honor. It will be very helpful in paying for my degree!”

Another recipient, Grace Lovett, will attend Central College in Pella, Iowa, to play softball and continue her academic career, majoring in biochemistry and Spanish and hope to eventually attend medical school.

“Receiving a Vision Scholarship shows that all of my hard work during high school has paid off,” she says. “It fills me with joy knowing that I can help my parents with the cost of my education.”

The Rodrock Vision Scholarship Program prides itself on being “a worthwhile investment in a brighter future for us all.” And with talented students like these, the future looks very bright indeed. 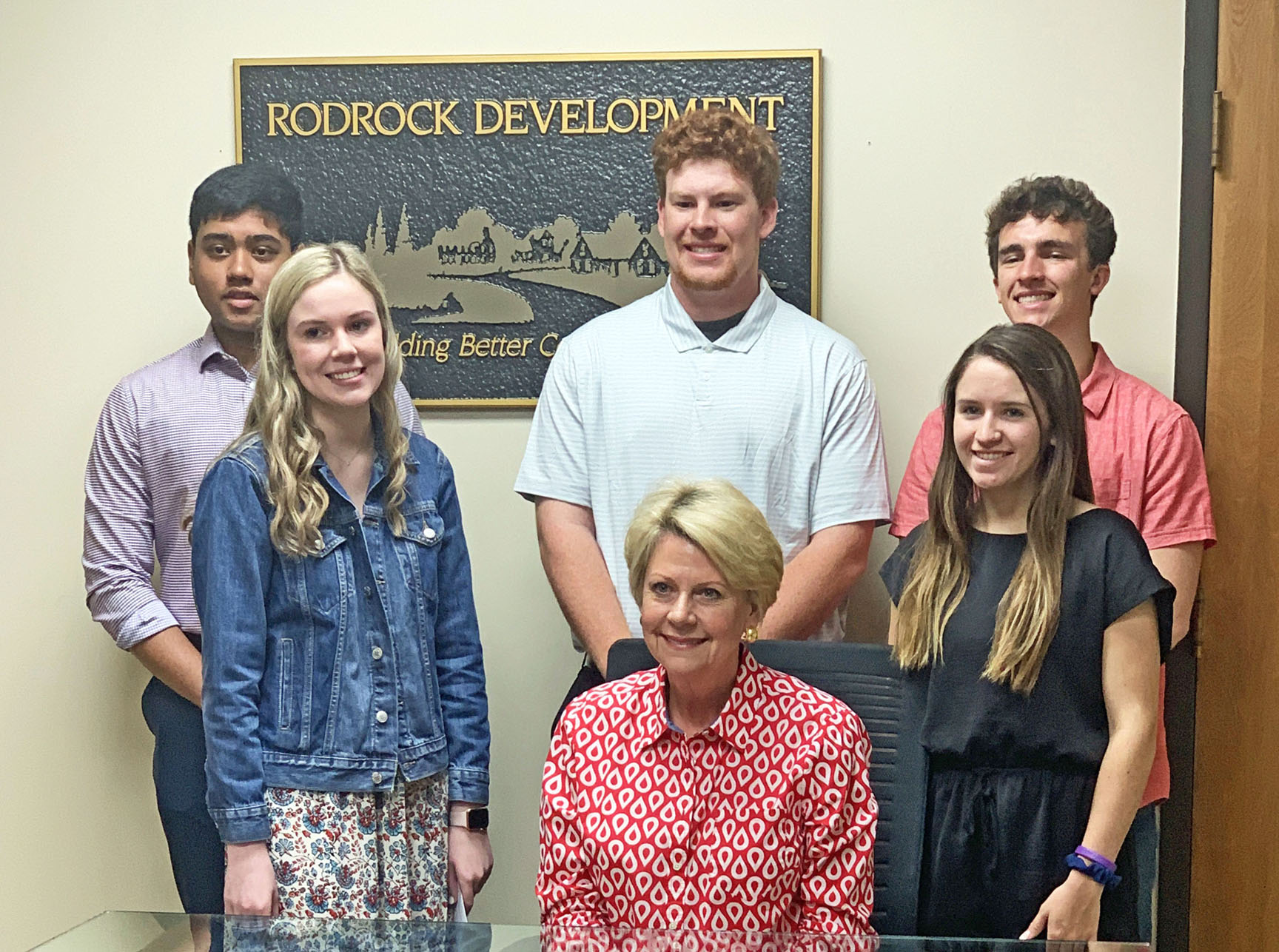 From varsity sports to religious groups, and student council to charity efforts, the Rodrock Vision Scholarship recipients went above and beyond during their high-school career. Winners included (from left to right, front row) Kelsey Emas and Lauryn Williams, and (from left to right, back row) Angelo Shekhar, Zach Hutchings, and Bishop Price, alongside Brenda Sanders, President of Rodrock & Associates, Realtors®.​ 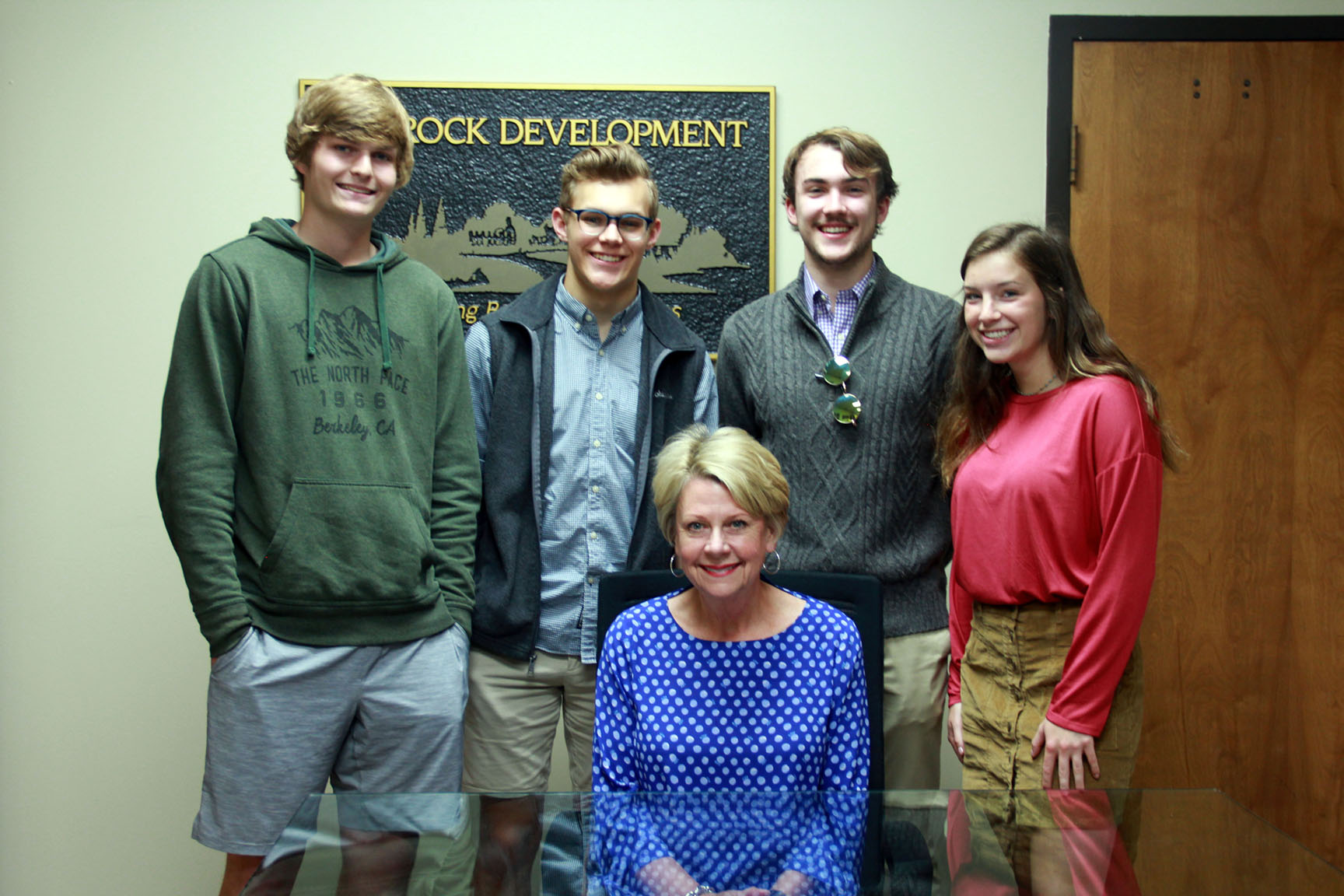 Rodrock Development believes in the importance of families, and that commitment stretches far beyond the confines of its carefully designed communities. Sure, quiet cul-de-sacs, top school districts, and family-friendly activities are part and parcel of Rodrock Developments. But the team also nurtures a sense of community through its annual Rodrock Vision Scholarship.

And this investment in young people resonates deeply with Rodrock Development residents. Just ask Brie Stingley, who earned the Rodrock Vision Scholarship in 2008.

“It meant the world to me that an amazing development company like Rodrock, which developed the home my family lived in, would help provide financial means for me to obtain an amazing college education,” Brie recalls. “I decided to go to a small, private (but expensive) college in Chicago. Rodrock Development helped provide me the means to do this.”

Brie had plans to be a child clinical psychologist and incredibly completed her Bachelor of Science in 3 years. “One of my professors suggested before applying to grad school I experience the real world to make sure that’s what I truly wanted to do. I went to a college fair and was recruited by The Chicago Sun Times, and I fell into the media and advertising sales side of business. I graduated in 2011 and have been in that vertical since. There’s so much psychology behind advertising, so I use my degree on a daily basis.”

After marrying in August, Brie and her husband put down roots in Kansas City. Brie now works for The Kansas City Star and McClatchy, all while coaching figure skating on the weekends. “I’m currently the local sales manager with a heavy focus on digital growth as well as Kansas City Spaces magazine. I love my job, and no day is the same!”

Now in its 22nd year, the Rodrock Vision Scholarship is offered to graduating seniors who’ve demonstrated a commitment to their communities, the ability to set goals and achieve them, and the capacity to assume responsibility. The scholarship requires applicants be a member of the 2019 high-school graduating class, live within a Rodrock community, and have plans to continue their education beyond high school. Each was carefully chosen after completing a thorough application process that included written statements, character references, and personal interviews.

This year, some $4,000 was awarded to deserving students. From varsity sports to religious groups, and student council to charity efforts, these students went above and beyond during their high-school career.